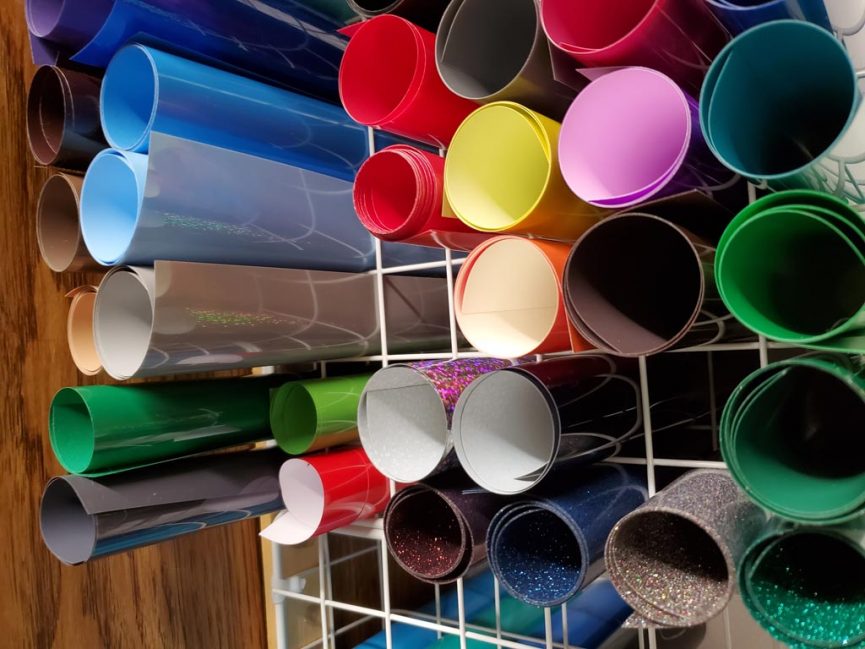 When you buy a cutting machine like a Cricut, you’re not only forking out hundreds of dollars for the machine, but adding tools, mats and vinyl will also easily cost you an extra few hundreds. And then you need materials and blanks to unleash your crafts on to make something pretty to sell! The infamous vortex or rabbithole….

If you want to make “all the things”, you will want “all the colours”! Just in case. Even though you will most likely use black and white the most. And then there is patterned vinyl (ooooh buffalo plaid!) and extra pretty stuff like glitter, holographic or metallic! So, having a basket to throw the rolls and sheets in, is not going to cut it. Since I love looking at colours, I wanted my selection to be out in the open – also easy to keep an eye on what you have in stock that way. So instead of keeping my sheets flat (some people also cut up their rolls into sheets to store everything flat), I chose to roll up everything.

I started with gluing cut up cardboard rolls on a slat, but it was disappointing. I love that look, but I did not have nearly enough rolls to put all my vinyl rolls and sheets in. And even if I did, I would have to build it out way too much. I contemplated buying PVS or ABS pipe to make a standing version, but that wasn’t exactly cheap.

Pinterest and Google have lots of inspiration for vinyl storage, but nothing that would fit in the space I wanted to use. Something with cubbies could work, and that reminded me that I still had some wire grid shelves. I came up with a different idea to shape them into the width and depth that I needed and attach and stack them with zip ties, see pictures! Now I have TONS of room for all my rolls, rolled up sheets, and them some!!!

My most recent Portfolio items:

Christmas decor with trailer and vinyl